Living in South Bengaluru in the vicinity of the 13 acre Puttenahalli Lake, my friends and I could not bear to see the lake dying a slow death. Four of us therefore got together, mooted a campaign and got the BBMP to rejuvenate it. Once work began in 2009, we realized that without supervision the fencing could get breached, materials stolen, workers would do a shoddy job, etc. To oversee the work, we formed the Puttenahalli Neighbourhood Lake Improvement Trust (PNLIT), a registered, not for profit, public trust, in June 2010. We signed an MoU with BBMP in May 2011 and became the first official citizen custodians of a lake in the city.  BBMP gives structural support while we meet maintenance expenses from donations made by well-wishers. Maintaining the lake poses challenges and surprises every day. Our grassroots intervention is an exacting yet enriching experience forcing us to come up with out of the box solutions to problems such as idol immersion. 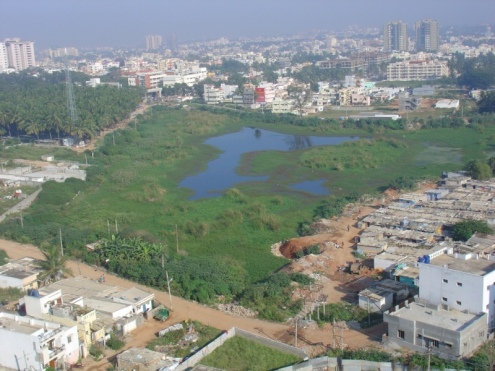 Perceived futility or lack of citizens’ participation in civic affairs is the most important gap in improving the quality of urban life. Our experience shows that by working together we can bridge this gap. The rejuvenated Puttenahalli Lake has encouraged resident welfare groups and individuals across the city to replicate our work. At present over 30 groups are engaged in lake restoration in the city. This is a healthy trend which needs to grow and include every resident. Only then will Bengaluru regain its glory as a City of Lakes.

PNLIT has been conferred with several honours including the Namma Bengaluru Award. However, our real triumph will be to see Puttenahalli Lake become a community responsibility with the neighbourhood coming forward to protect and nurture it. In this lies the survival of our children. To quote Dame Jane Goodall, “The greatest danger to our future is apathy.”